What can you achieve as a female lifter? There seem to be only 2 camps. The general public thinks a woman that touches a loaded barbell will wake up the next day as the SheHulk.

People with a bit more understanding of exercise physiology realize that this is obviously nonsense. One look around you in the average gym makes it clear that getting seriously big is difficult even for men. The statistic that women have ~15 times less testosterone than men is often quoted to explain that as a woman, you can’t grow much muscle anyway. So the common recommendation in today’s fitness circles is that women should train like men and should expect not to see much muscle growth.

The natural muscular potential of women

There is truth to this, but the causality runs in the opposite direction. Before I explain this, let’s first look at how the natural muscular potential of women compares to that of men. Percentage wise, how much muscle can a woman build compared to a man? Does it scale with testosterone so that women can build only ~7% as much muscle as men? Is it about half?

It’s 100%. Women gain the same percentage of muscle mass as men during strength training. In fact, women gain as much size and sometimes more strength than men [2]. The only difference is the starting point. Men start off with more muscle mass and more strength, but the relative increase in muscle size is the same between men and women.

Research on protein metabolism comes to the same conclusion. Women build just as much muscle protein after training and after meals as men. In fact, one study found that given the same level of muscle mass, women have a higher rate of muscle protein synthesis than men. 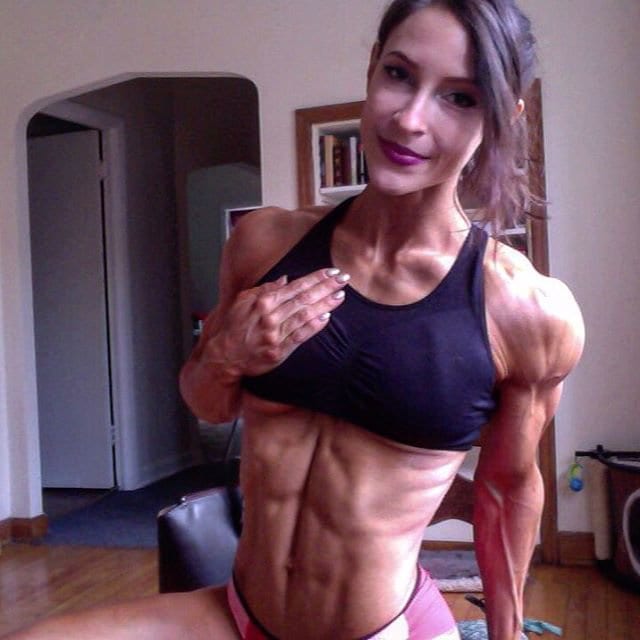 I worked with Hayley Hirshland (now Hayley Yamanaka) for over 2 years. During this time, she won her pro card in Fit Body and Figure (yes, 2 pro cards) and took first place in her first pro show, the WNBF Pro-Am Central USA Natural Championships.

Women vs. men in elite sports

If you think this is all just silly theory from labcoats studying beginners, consider this. Elite, natural female athletes have 85% as much muscle as elite male athletes. The studied sports included Olympic weightlifting and powerlifting. The 15% difference can easily be explained by 3 factors.

Within an individual, more testosterone means more muscle mass. There is little doubt about that. Between genders, however, the relation becomes much weaker. In their study of elite athletes, Healy et al. concluded that “The difference in lean body mass is sufficient to account for the observed differences in strength and aerobic performance seen between the sexes without the need to hypothesize that performance is in any way determined by the differences in testosterone levels.”

How can this be? Testosterone functions differently in men and women, as I explained in my BioSignature review. In animals we have a good understanding of why testosterone is not needed for muscle development in women. It seems growth factors like IGF-1 and growth hormone take over the anabolic role that testosterone has in men. Growth factors are more important for strength and muscle mass in women than in men. Since women have just as much IGF-1 as men and women produce ~3 times as much growth hormone as men, this explains in part why having less testosterone does not limit how much muscle they can build. To make matters more complex, the sex hormones and growth factors interact and all these hormones also interact with your genes.

In short, saying women have less potential to build muscle mass because they don’t have as much testosterone as men is shortsighted.

I’m confident my former client Nancy Keizer is drug-free. She looks like this simply because she wants to and is very casual about her physique.

The other sex hormone

Not only is testosterone not the great savior, estrogen is not the bad guy. Most people, even women, shun estrogen as the evil hormone that makes you bloated and does all sorts of negative things. Although it’s rarely described what exactly the negative effects of estrogen are, most people agree nonetheless that’s it’s bad for your body composition. This is complete nonsense. In my article on hormones and fat loss I explained the positive effects estrogen has on abdominal fat storage, but estrogen does many more awesome things.

Why women aren’t living up to their potential

Women have the same relative natural muscular potential as men. They even have several advantages over men. So why don’t we see more muscular women?

Lastly, the women that do actually train seriously in spite of the stigma often train like men, which doesn’t align with their physiological strengths. Since women produce much more estrogen than men, this gives them several advantages over men in the gym. Women don’t fatigue as much as men and women recover faster after training. There are many more important gender differences in metabolism, anatomy, neurology and physiology: see this article a full review of why and how women should not train like men. (If I just offended any feminists, get real.)

It’s time we stop treating women like second rate men. Women have just as much relative potential for muscle growth as men. It’s up to them if they want to fulfill that potential. If they do, they should realize they’re not men and train to their strengths.

The No BS Guide to Building Lean Muscle .